Steve Gruskin with another Interludes release. This one is a different pace and has brass fanfares in it. I would not reccomend this one for meditation, but for work or study (or background music for the house) would be great use for this CD. 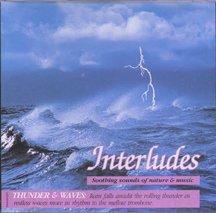 Part 3 of my CD gifts! Another Interludes album, this time with sounds of a mountain stream and beautiful harp music with other instruments. A must have! Part 2 is my favorite out of the two parts. 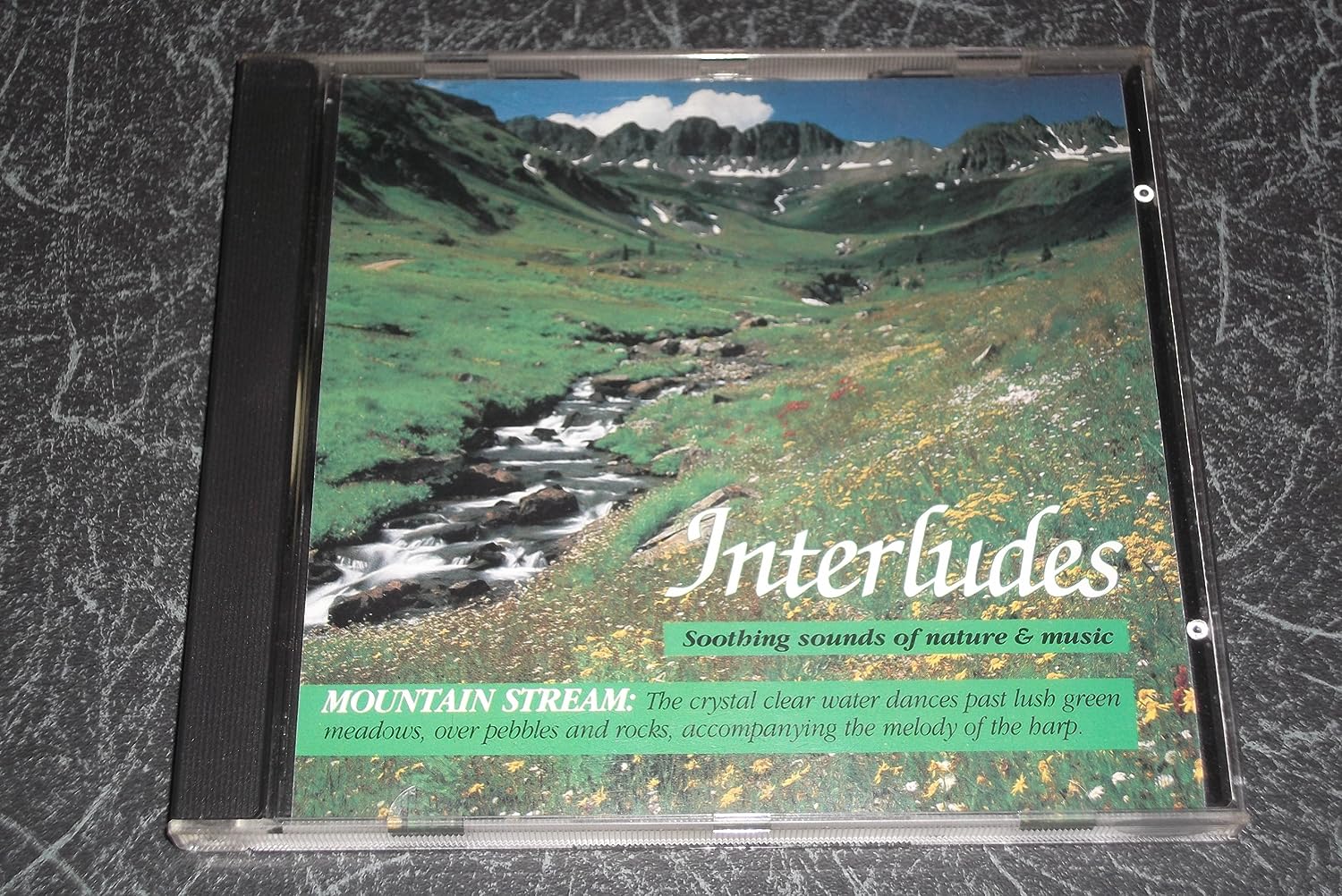 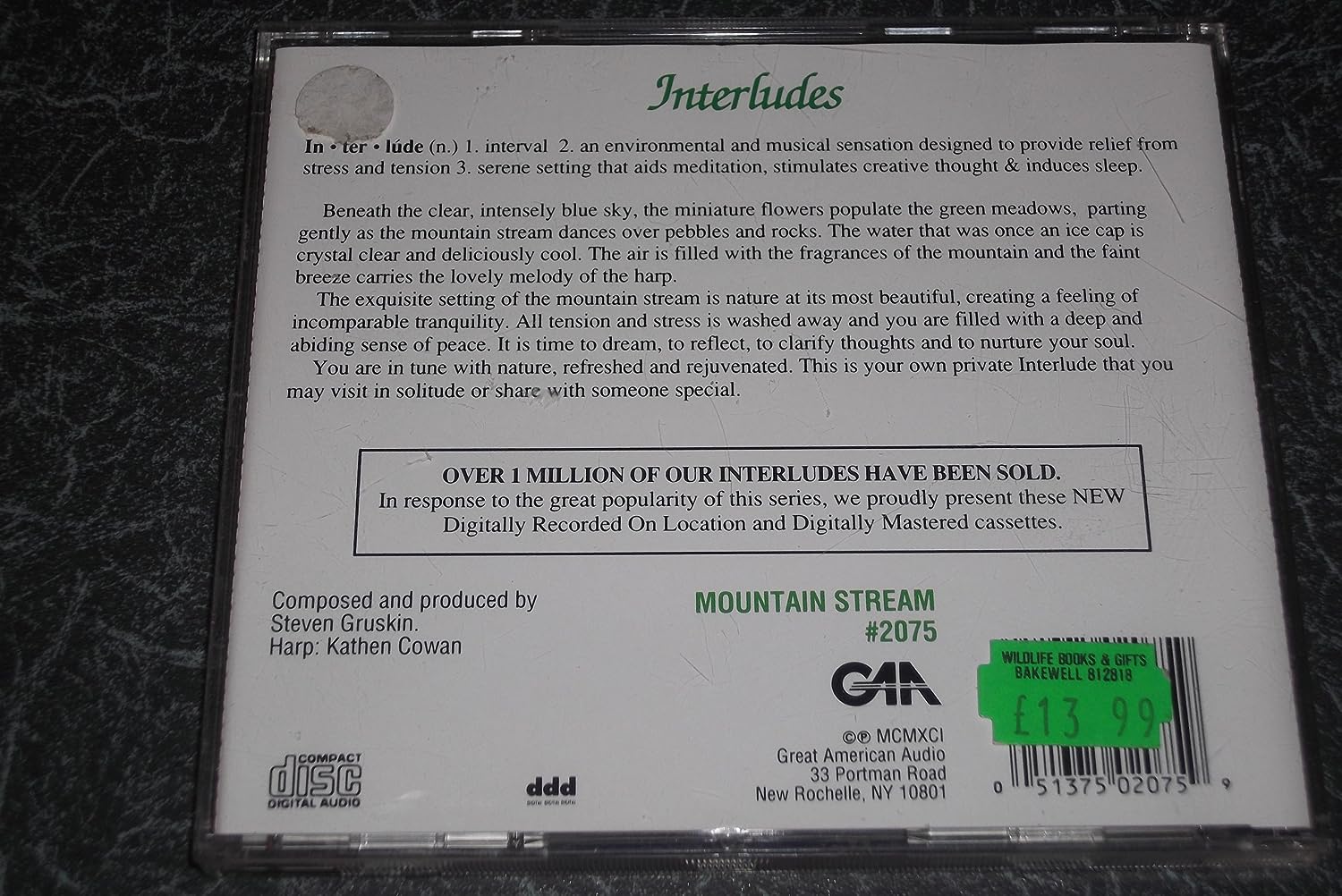 Posted by Serveaux at 7:45 PM No comments:

Part 2 of my Holiday CD gifts! A great Interludes CD I've had my eye on for a while. Beautiful electronic music, flutes, harp and more, set to the sounds of a bubbly brook. Gruskin's Interludes series  always promises, and this one doesn't let down! 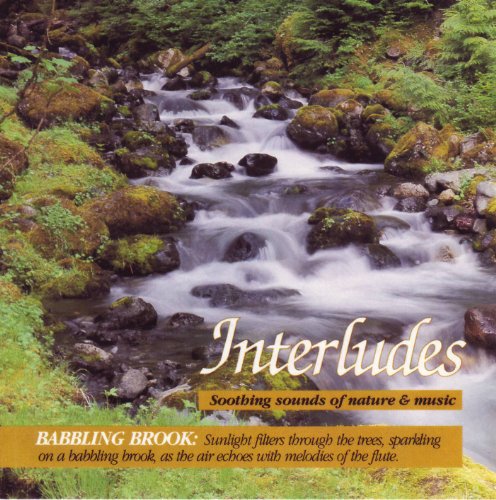 Posted by Serveaux at 7:28 PM No comments:

Part 1 of my Holiday CD gift! I have 3 other albums to post here as well! The first one is a beautiful mixture of harp and other instrumentals, a wonderful tool for meditation and sleep by skilled harpist Carol Emanuel.

"The soothing sounds of the four seasons: Spring - gentle rain, Summer - frogs, crickets and ducks in a summer ambience, Fall - breeze in the trees, birds chirping, Winter - a snow storm. The sounds of the seasons will tend to calm and relax you as you identify with the wonders of each season. A beautiful aid to visualization, and ideal for blocking out environmental noises and distractions."

Another great nature recording. 4 tracks are included on this release, each sounds taken in a forest in each of the four seasons, Winter, Spring, Summer and Fall - and what a nice recording it is. I find myself listening to the "Winter" recording while sipping hot chocolate in a blanket.


Another field recording, this time of a forest. Perfect for helping you sleep.


Four Seasons (I fixed the link, here it is guys)

Posted by Serveaux at 8:45 PM No comments:

"Listen to the distant crash of thunder during a mountain rainstorm; there is something romantic, soothing and comforting in the sounds. The peaceful sounds of the gentle rain lull you as the essence of the storm clears your mind and refreshes you, invoking a sense of tranquility. The rainstorm can be a beautiful aid for visualization and is ideal for blocking out environmental noises and distractions."


Happy belated Thanksgiving!  We are back again with some nature sound recordings, this is the first of three we just got. This one has nice, relaxing sounds of the rain and thunder, a sound which I have loved using to help me sleep in years past.

Posted by Serveaux at 8:41 PM No comments:


Hello, here is an update of the list of releases we do not have. Remember, There exists many releases that may never have been discovered yet, so those are not on the list either.

*There are a few releases from Karl Schaffner, Daniel Berthiaume and others  that were not put on Valley of the Sun- despite that, I have them named here and still will post them when I get 'em (and when I discover new ones)

NOTE: There are always tapes that we have not discovered the names of yet. So remember, even if it's not on here, we may not have it. Works that are by familiar valley of the sun or GAA artists that are done on other labels will be here too, so if anyone knows of any, bring them up.

Email ThisBlogThis!Share to TwitterShare to FacebookShare to Pinterest
Labels: Tapes

Hello to everyone who follows this blog.

Just updating to let you know I'm still alive. I do hope to get some more material to post here soon, but right now I do not have anything. I hope everyone is having a good fall.
Posted by Serveaux at 7:12 AM 4 comments:

Here's another great Effort from Upper Astral and Dick Sutphen with guided meditation.
The Upper Astral tracks that he speaks over are from the Nightwinds tape which you can find on this blog.
Mansion Of Beauty

Posted by Serveaux at 7:19 PM No comments:

Having a good summer, I hope?

Hey everyone. It's been a while but I am finally taking the time to make a post again. I missed posting here. Unfortunately I have nothing New for you at the moment but hopefully I can find something in the future.
Posted by Serveaux at 1:54 AM 4 comments:

It seems to be true, I saw it on Sutphen's website. I wonder if that means we can hear a digitally remastered version of that great album?

Track 1: Skybirds is structured for you to transcend levels of consciousness, soaring high above the earth as a bird. Seagulls, the sound of the surf, and an acoustic grand piano are used with a synthesizer which creates soaring arpeggios and subtle French horn-like sounds. You’ll feel like you are circling, circling and soaring through a vast emptiness of beautiful music that supports you and soothes your soul. Subliminal voices are saying, “up, up, higher, higher, fly with me,” and similar phrases.
Track 2: Seagulls and surf are combined with an “Ohm”-sounding synthesizer bed and a gentle, melodic French-horn sound to create a soothing, sustained environment."
Posted by Serveaux at 9:15 PM 3 comments:

Karl Schaffner and Lothar Grimm make more great ambient music together in this album. It was re-released in 2013, but I do not know when the original release of this album was. You'll enjoy this one.

Posted by Serveaux at 8:47 PM No comments:

This album is probably Daniel Berthiaume's best work in my honest opinion. Great music and it really does make me think of the moon, the stars, and night time. perfect for listening to while lying outside when the crickets are out. 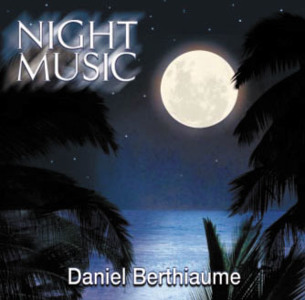 This is a straight-up new age album featuring David Storrs and an artist named Tony Selvage. This one is beautiful and it's definitely worth a listen. The two work very well together in these songs.
(Sorry about the brief description, it's late and I have had a couple albums to put up tonight.) 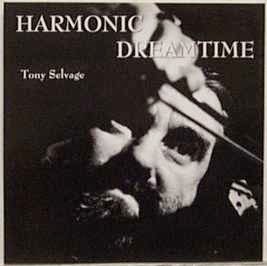 David Storrs - Invaders From Mars- Music From The Film (1986)

This time we have a film soundtrack done by David Storrs. Far from a new age album, but it showcases some great dark ambient and spacey electronic music to hear. I have it uploaded in two seperate parts for you to download. It's a change from what I usually have here, and I've been sitting on this album for months and forgot to upload it, so here it is.

(This is the version I had the music from)

Posted by Serveaux at 8:37 PM No comments:

A mid 1980s Karl Schaffner, yet another classic released on Isis. I may have too look more into this label to see what other artists put out tapes on it!

This album is a great relaxing sound, Lothar Grimm's name is nowhere to be found on the tape art so I assume this is a solo release from Karl.


Enjoy the great "Mountains In The Sea!"

Karl Schaffner - Mountains In The Sea 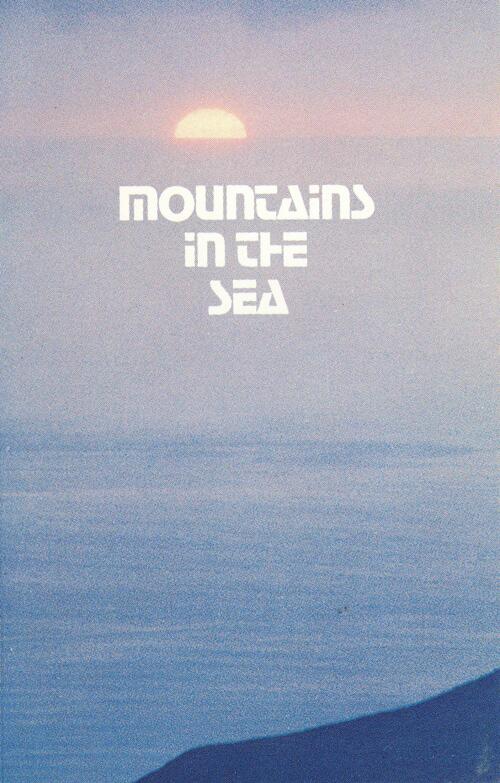 Posted by Serveaux at 8:28 PM No comments:

Altered-State hypnosis/meditation tape by Dick Sutphen, features music from David Naegele's Journey out of the body on track 1, Upper Astral's Crystal Cave: Return To Atlantis on track 2, and unknown music on track 3. Truth be told I haven't tried using these for meditation or anything yet but I plan to.

This tape features excerpts taken from David Naegele's "Dreams of Atlantis", but also includes more music I have never heard before. It's worth a listen, it has subliminal messaging in it I assume- I haven't listened close enough yet.

Only Subliminals (This is the correct link)

Happy Cinco De Mayo! Today we have a great spacey electronic album from Karl Schaffner (With a hint of guitar and traditional instruments!) It is entitled "Flying Carpet" and it was released on Isis in '84/ It has some great tracks on it, such as the ethereal "Passage", the jovial "Sailing" and the guitar backed chilled out "Longitude", among many others. I certainly recommend a listen. Lothar Grimm helps out on this album, much like some of Karl's past works I have posted.

My computer is going through some problems so there are a couple albums I cannot upload here at the moment- but as soon as I have the ability to do so I will upload them.
Posted by Serveaux at 2:14 PM No comments:

Another fine album from Daniel Berthiaume, I believe this one is self released. It has some nice, relaxing tracks on it.

Daniel Berthiaume- Arizona
Posted by Serveaux at 1:51 PM No comments:

Another great release from the Interludes: Soothing Sounds of Nature and Music series! Relaxing rain, sounds of the harp and synthesizers make up this release. A definite listening is advised and using this to help you relax or sleep is great!

Another great release from GAA, an edition of the Interludes: Soothing Sounds of Nature and Music series. Beautiful synth and harp sounds to the sound of waves spraying against the rocks of the ocean. A must hear for new age fans!

Posted by Serveaux at 8:13 PM No comments:

Body relaxation tape by Dick Sutphen from 1986, has music in the background but I am not sure who the artist is. The music does not sound like any of the Valley of The Sun artists I know of.  Enjoy. 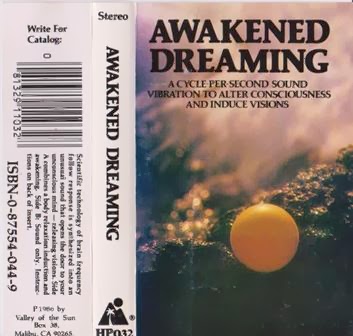 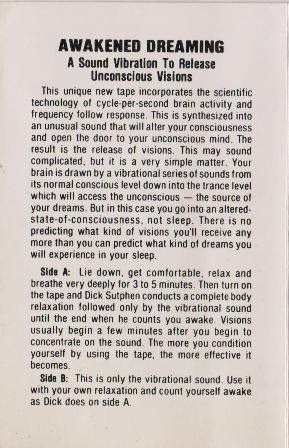 Posted by Serveaux at 7:41 PM No comments:

Hypnosis tape by Dick Sutphen, featuring more metronome in the background. From 1976, released on cassette. This might be his first release, as Sutphen started his practices of self help tapes in 1976. 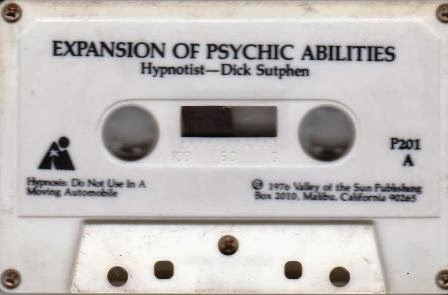 Posted by Serveaux at 7:36 PM No comments:

An early meditation tape from Dick Sutphen with a metronome in the background. One of the earliest tapes that has been put up on this site.

Posted by Serveaux at 7:30 PM No comments:

Hello. I'm back with another release from Steve Gruskin, who worked on the Interludes series. This is Hymns By the Sea: Gentle Waves, a collection of Religious songs done in harp and synth with waves in the background. It is nice to listen to.

Posted by Serveaux at 2:16 PM No comments:

I have gone back to fix this listing right here.
REMEMBER: There may always be releases I do not know exist yet.

*There are a few releases from Karl Schaffner, Daniel Berthiaume and others  that were not put on Valley of the Sun- despite that, I have them named here and still will post them when I get 'em (and when I discover new ones)

NOTE: There are always tapes that we have not discovered the names of yet. So remember, even if it's not on here, we may not have it. Works that are by familiar valley of the sun or GAA artists that are done on other labels will be here too, so if anyone knows of any, bring them up.

Info On the "Snow Dreams" release

Happy new year! While shopping on amazon I came across as copy of Snow Dreams AKA Winterscapes, and it seems to have the written name of the musician on it. It looks as if it says  "Duane A. Lobben." If this is so, this is an artist to look up.

By the way, there will be more coming to this blog soon! 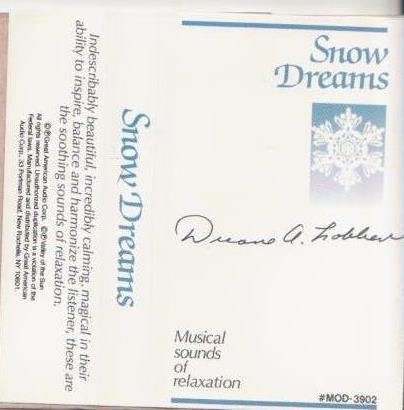